Noam Chomsky and Pepe Mujica will star in a documentary in which they reflect on the need for “a radical change of global direction”. The documentary is titled “Chomsky & Mujica” and is in the post-production process in search of collective financing.

Unlike other times, today we have the impression that the world is spinning faster. Understanding our reality is very difficult, but it is for this reason that we need, more than ever, intellectual and wise people who are dedicated to thinking critically about our society. Two of the most important today are, without any doubt, Noam Chomsky and Pepe Mujica.

This is why the Mexican filmmaker Saúl Alvídrez thought to gather them during a weekend to make a documentary. The idea is simple: to discuss the current disturbing world situation. This meeting actually already happened and the filming came to an end. The documentary is titled Chomsky & Mujica but it is not yet finished; The post-production is missing.

In the Kickstarter website, a micro-patronage web platform for creative projects, there is the preview of the documentary Chomsky & Mujica, a three-and-a-half-minute video that shows the tone, aesthetics and the film’s thread. The filmmakers seek to finance the final stretch of the project: they need to raise $ 19,200. But they clarify that if it reaches 38 thousand dollars, the costs for the distribution of the documentary in festivals will be completed. 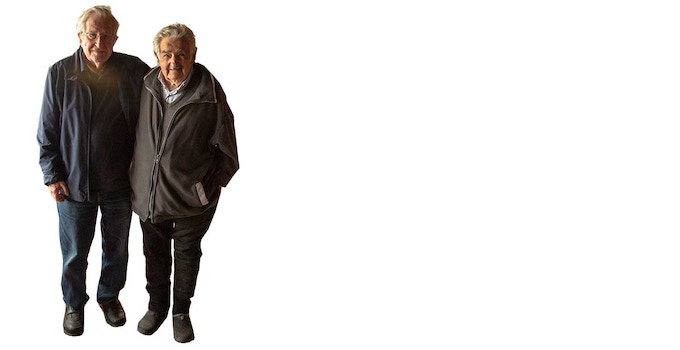 Noam Chomsky: According to the New York Times, “judged in terms of power, range, novelty and influence of his thought, Noam Chomsky is arguably the most important intellectual alive today”. Commonly known as “the father of modern linguistics” (a field of study that he revolutionized when he was just 29 years old), Chomsky is an American linguist, philosopher, cognitive scientist, historian, social critic, and one of the most iconic political activists of our times. For many decades he has been a major figure in political analysis, analytic philosophy, and is also one of the founders of cognitive science. Institute professor emeritus of the Massachusetts Institute of Technology (MIT) and laureate professor of the University of Arizona (UA), Chomsky is author of more than 100 books and probably the most famous American political dissident.

José “Pepe” Mujica: With a biography that we could even call legendary, he is another hyper-disruptive and extraordinary character. José Mujica was part of the “Tupamaros” guerrilla, back in the days of the harsh Uruguayan dictatorship. He spent almost 15 years imprisoned in inhuman conditions, near to death and madness for the terrible years in total isolation. He received several bullets and managed to escape from jail a couple of times, but when he was finally released, he struggle again for many years and became president of Uruguay. As president, he surprised the entire world by demonstrating that politics can be done differently.

Their filmmakers say Chomsky & Mujica, “is the most important intellectual film of our time and the most beloved politicians in the world, Noam Chomsky and Pepe Mujica; an unprecedented encounter full of wisdom”.

What is this documentary about? See a short fragment:

The director appears on the platform as follows: “My name is Saul Alvidrez, I´m 31 years old; Mexican. Back in 2012, when I was 24 studying Law and Economics at Tecnológico De Monterrey University (ITESM CSF) in Mexico City, I was the first member of the Mexican social movement #YoSoy132; but my political activism was viciously neutralized though direct attacks from the Mexican Government Intelligence Agency (CISEN) and the most powerful media conglomerates of my country”.

And he continues: “That persecution and fabricated media scandals changed my life pretty strongly, and because of that, my dog Zeus and I went for an auto-exile in South American countries like Argentina, Bolivia, Colombia, Uruguay and Ecuador. In there, I was lucky enough to study a lot for some years, and especially through my investigations on Noam and Pepe I discover my personal mission in life, which now I know is to amplify the public conversation and focus it on global problems. That´s why I have been working on this project in 4 different countries for 5 years now. And after almost 20 flights, writing more than 600 e-mails and with close to 1000 hours of work, we are very close now to finish the best movie that I could ever imagine. This is my first documentary”.

For the younger generations 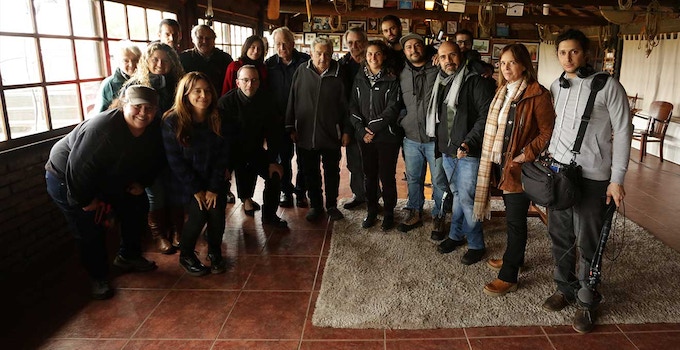 The meeting between the two intellectuals took place in Montevideo. Both the philosopher and the former President of Uruguay attended with their wives, Valeria and Lucia, and spent the entire weekend chatting while the cameras filmed them. Despite their ages – Chomsky is 90 years old, and Mujica, 84 – the documentary is for the younger generations. “It is a beautiful and urgent message to humanity. Explore the love, life, freedom, power and the main challenges of the 21st century along with two extraordinary characters who had never crossed their paths before,” say the filmmakers.

“The younger generations have inherited the greatest danger and responsibility of all human history. Today, the ecological, economic, political and social collapse for our unsustainable civilization seems imminent. Therefore, millennials and centennials must achieve a radical global change in the coming decades; but how? This project seeks to answer that question, simply because it is the most important question at the moment. And to achieve this it was necessary to gather a lot of wisdom” they conclude.

The need for “a radical change of global direction” is evident in the different mobilizations that happen throughout the planet. However, it is important to reflect on everything that is happening. Chomsky & Mujica seems to be the right documentary to do it.

Find out more about the documentary:

Volunteer, photographer, and a citizen of the world. :) The world is full of opportunities: my mission is to discover them and share!