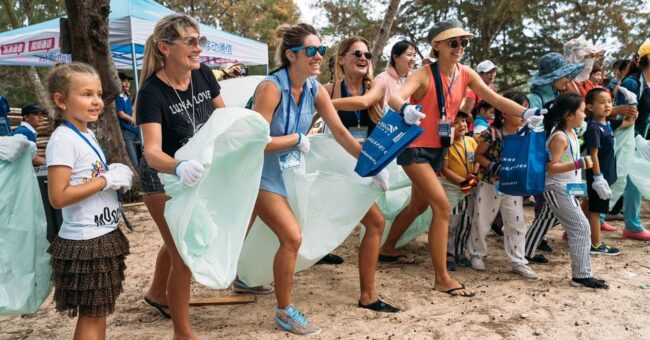 Collect 20 tons of waste in 2 hours. Residents of the Baltic region countries will learn how to hold ecological competitions

On the 12th – 19th of April volunteers from the Baltic region countries will take part in the Clean Games online workshop. Experts of the project will teach them how to organize ecological competitions in waste collecting and sorting and the participants will even hold their first test game.

My name is Jane, I represent the Clean Games project. On the 12th – 19th of April volunteers from the Baltic region countries will take part in the Clean Games online workshop. Experts of the project will teach them how to organize ecological competitions in waste collecting and sorting and gather 10 times more garbage than during a traditional clean-up. The participants will even hold their first test game.

After the workshop, activists will be invited to organize competitions within the third Clean Games Baltic Cup – an international tournament, which will take place in September.

Via a webinar series the participants will get acquainted with the gamified format of the clean-ups, will learn how to work with the IT-platform, negotiate with stakeholders and attract a wide audience from media to businesses and local authorities. After each webinar, they will complete home assignments, and in the end, they will check themselves up and organize test games in the Baltic cities. Registration to the workshop is opened via the link: http://balticcleancup.com/#registration

Each participant will not only hold a test game for their family and friends but will also get access to the Clean Games methodology and will be invited to organize games within the Clean Games Baltic Cup – an annual international tournament, which will take place on the 18th of September for the third time. The organization can reimburse some of the expenses.

Clean Games are team competitions in waste collecting and sorting. During games, players use our mobile app – just like Pokemon Go. Since 2014 more than 1000 games have taken place in 20 countries. Up to 1500 people take part in one game and collect 20 tons for an hour. On average a player collects 10 times more waste during Clean Games than during traditional clean-ups.

Clean Games Baltic Cup is a project, that aims to hold environmental education activities in the countries of the Baltic sea region. It is also an eco volunteer project born in 2014. The organizers run gamified clean-up competitions. So far, they have held 853 events in 16 countries with 59 755 participants, collecting 152 471 bags with 1207 tons of litter. How does it work?

Using the mobile application the organizers will mark the littered areas in their cities. And the participants will follow the map to find garbage to collect. Volunteers will receive the garbage from them and enroll the game points to them. An online scoreboard will be available in the app and on the website. Participants will compete with each other within the city and the whole tournament.

To take part in the game, subscribe to the relative official page: http://balticcleancup.com/

The Clean Games Baltic Cup is looking for partners and volunteers too!

The international non-profit organization “Clean Games” runs ecological tournaments in the Baltic countries every year. The organizers are looking for volunteers in the Baltic countries who will organize events within the Baltic Cup. They are also looking for partners to attract as many potential organizers as possible. An organizer is an active person who can gather up to 30 people and coordinate them in order to host a game using our methodology which is free. If you like the idea of helping to organize an ecological competition in your city or know people who might be, you can fill-up the form at http://balticcleancup.com/

Registration to the workshop via the link: http://balticcleancup.com/#registration

Go back to the BLOG section